This Netherland-based EV startup has revealed Lightyear 0. It is the world’s first production-ready solar car, which will have a significant impact on the upcoming e-mobility in the future. Previously known as Lightyear one as a concept, it has been under development for 6 years. Let’s see what we know after the unveiling:

The company revealed that it is powered by a 60kWh battery pack that churns out 174hp & an incredible 1720Nm of torque. This battery pack supplies power to the four electric motors at the respective wheels. They claim that it can go from 0-100km/h in 10 seconds and has a top speed of 160km/h. 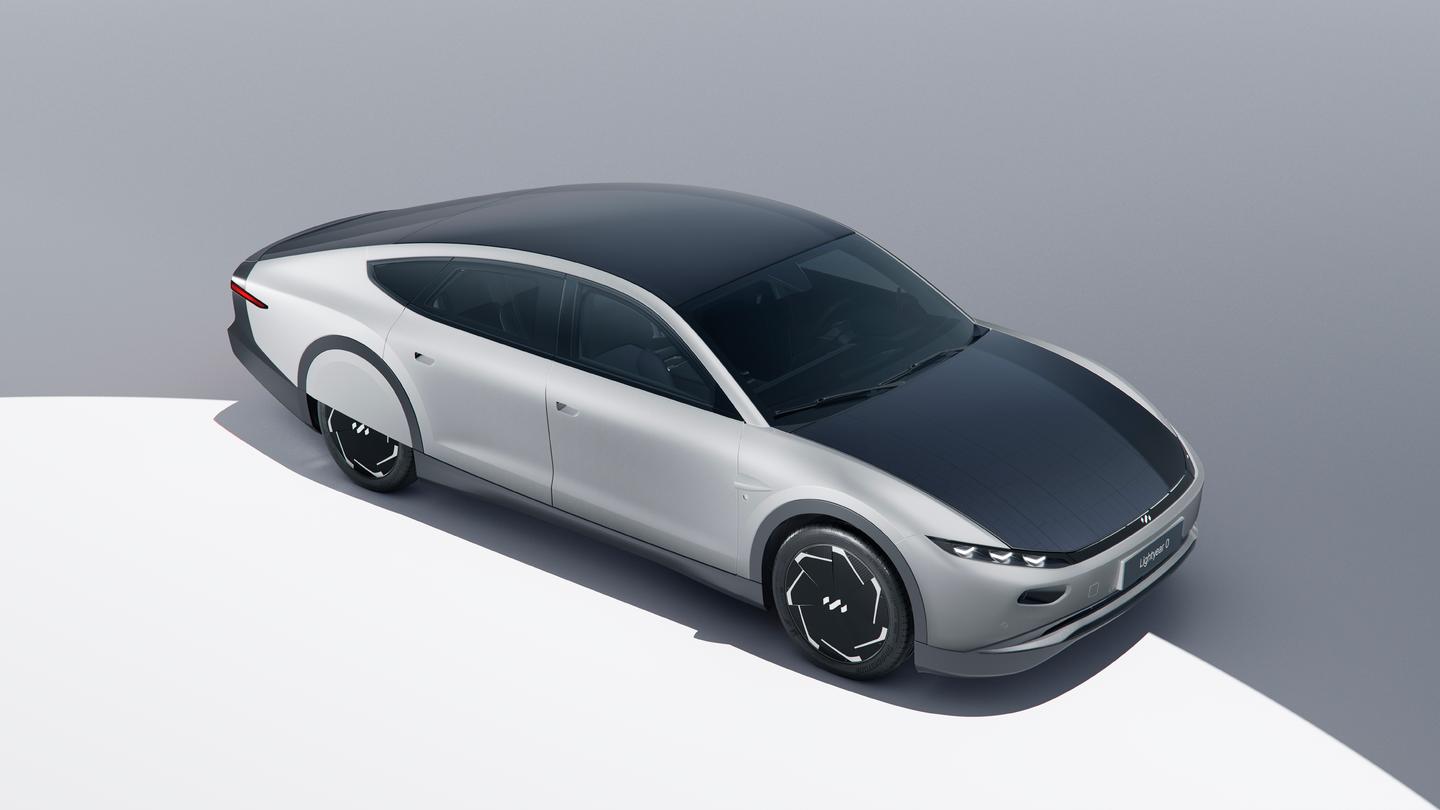 Coming to the charging details, it is equipped with 5 square metres of double-curved solar arrays that contribute an additional 70 kilometres of range per day. These panels on the hood & fastback roof of the car won’t fully charge it, but their efficient first approach makes sure that Lightyear 0 will spend way less time charging. The solar panels can provide a constant trickle charging of up to 1.05kW under ideal conditions. When plugged into a home socket, it can charge at 32km/hour, while fast charging can go up to 520km/hour.

While this company specialises in SEVs: Solar Electric Vehicles, Lighting 0 does seem like a promising SEV with great potential. The claimed range is about 625 kilometres on a single charge which can go up to 695 kilometres with the additional solar arrays covering the SEV. 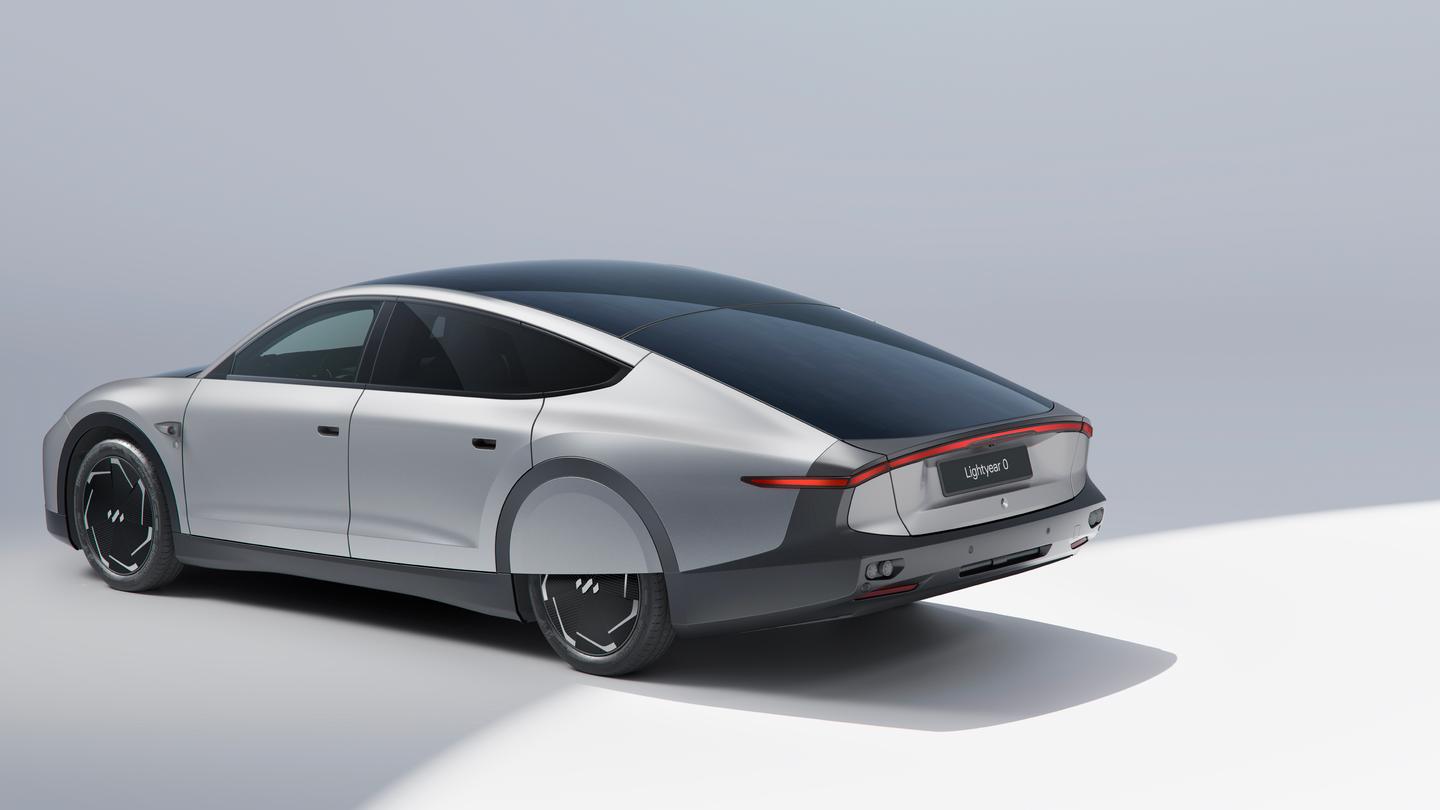 Another factor contributing to this excellent range is the exceptional drag coefficient of 0.19, making it the most aerodynamic family car ever built. It runs on specially developed tyres by Bridgestone, which further reduces the rolling resistance.

Sticking to the whole environment-friendly & sustainable initiative, the interior can be termed as a funky vegan. It utilises plant-based leather, recycled PET bottles, rattan palm wood trims & microfiber upholstery for the interior of the Lightyear 0, which still seems spacious & comfortable.

It can accommodate 5 people, including the driver, and has a 10.1-inch  touchscreen running an android automotive system with built-in navigation & supporting Android auto & Apple carplay.

Whenever we talk about electric vehicles, we always have the issue of charging stations on our minds. Because they are not increasing at the same rate as the EVs, Lex Hoefsloot, Lightyear’s co-founder and CEO, said the following on the same problem:

“To minimise plug-charging and maximise range, the industry’s strategy, so far, has been to add batteries. That increases the carbon footprint of production and, in turn, boosts weight and the need for high-power charging stations. Our strategy flips that approach. Lightyear 0 delivers more range with less battery, reducing weight and CO₂ emissions per vehicle.”

Lightyear also said that the 0 could drive up to weeks & even months without plugging it in for charging. They also said:

“In cloudy climates, based on the average commute of around 35km per day, you can drive for up to two months before you need to think about charging. In sunnier countries, that could be up to seven months.”

Overall this seems like a fantastic SEV, but Lightyear is planning to make only 946 units so far. As quality comes with a cost, the Lightyear 0 will cost €250,000 (US$266,000). The company will be offering test drives this month in Europe, with deliveries around November. While the package seems extremely impressive now, the real-world performance might differ a bit. What do you think about Lightyear 0?

Yuvam Guptahttps://gomechanic.in/blog
Mechatronics Engineer in the making | Automobile enthusiast | Creating revving content | Living life 1/4 mile at a time | Always hustling for skills, experience, and knowledge.
Previous articleThe Tata Tigor Is The Cheapest Electric Car And Why You Should Buy It!
Next article5 Things Only A Kia Owner Will Relate To